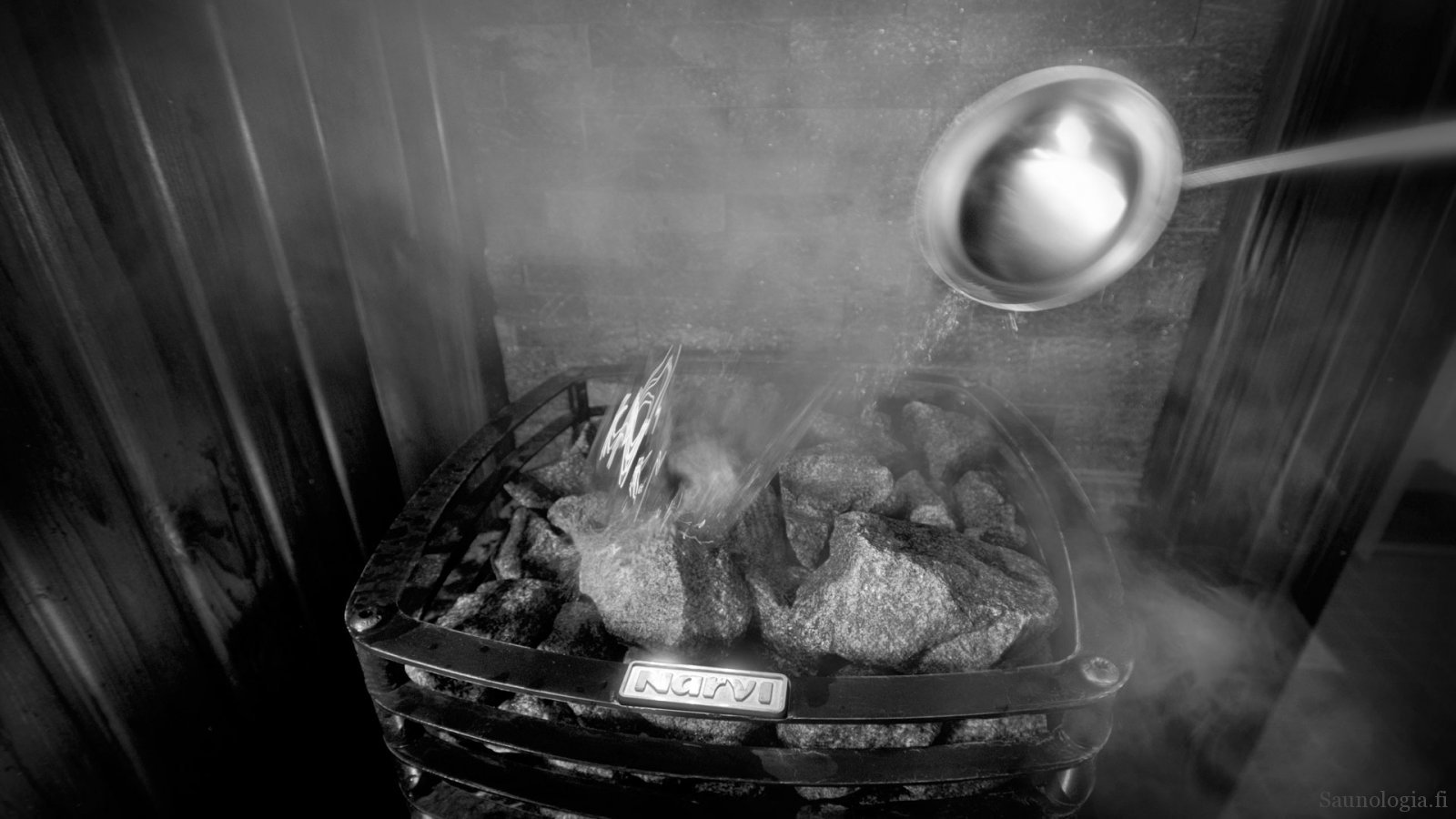 In the second part of the Finnish Sauna Essentials I discussed the differences between different saunas and the experiences they offer. I also revealed a four piece model that I use to explain differences between sauna experiences. This model included heat, air quality, room build and materials, as well as culture and company as key factors for a proper Finnish sauna experience. Heat is listed first for a good reason.

Many informal discussions in Finland around sauna begin and end with the sauna stove. Although people commonly speak of ‘heating up the sauna’ that is actually not crucial for the sauna experience – you can well enjoy sauna as long as there is stored heat energy in the sauna stones enough to create löyly even if the sauna room is not heated up to 80. In practice, it is difficult to have one without the other, if your stove if full of hot stones, there is usually unusually warm in the sauna room as well (löyly is the steam created by water evaporating from the sauna stones found inside the stove; water is manually poured upon the stones to achieve the effect).

But what sort of options do Finnish saunas have for a heater and what kind of results they produce?

Sauna heaters or stoves are a continuous source of chatter among the Finnish people. Some people exclusively prefer the wood-fired heaters. These are commonly found at summer cottages, in detached house and even at sauna enthusiasts’ city dwellings. However, electric heaters are probably more numerous at the moment and definitely clock more hours of use around the year.

There are plenty of stoves available in Finland. Since the Second world war, sauna stoves have been mass manufactured in Finland. Still, in the early 21st century, there remains over 20 sauna stove brands in Finland. This is explained by the fact that we’ve nearly three million saunas in this sparsely populated country!

Pinboard for stoves from Finnish trademarks

The most common stove types sold in EU (Finland is a member state) are subject to CE label and harmonized product requirements. This label and associated certification puts requirements on safety (electric and wood-fired) and the efficiency and emissions (wood-fired stoves). In Finland, the national requirements for safety are different from the rest of the world, but in general, our laws and standards are more permissive (as permitted within the EU framework). For instance, German laws have made the use of wood-fired stoves rather difficult.

There are of course major stoves manufacturers outside Finland as well. Tylö of Sweden, EOS of Germany, and Termofor of Russia are among the world’s biggest brands, competing with Finnish Harvia, the leading sauna stove manufacturer. There are regional variations to which types of stoves are the most popular ones. Finnish manufacturers have almost equally good offerings for both electric and wood-fired stoves, Central Europe is strongly geared towards electric and a few gas stoves whereas Russian and Baltic companies are almost exclusively wood-fired.

Pinboard of stoves from outside Finland

Why most Finns go for a “wood-fired sauna” instead of an electric one?

Many Finnish people consider the wood sauna superior to the electric one. However, the heater may not be the only thing to blame, because electric heaters have commonly been found in a different siting (location) and equipped poor or missing ventilation solution. For instance, placing a sauna inside an apartment is usually bad for ventilation. Although decent mechanical ventilation solutions for sauna, they have not been systematically applied even thou mechanical ventilation has been implemented as a standard now for decades in new buildings. Especially retrofitted saunas inside apartments are almost always destined to fail because missing or wrongly placed vents.

The legendary and mystical smoke sauna

The smoke sauna is an interesting outlier in comparison to the electric and wood-fired ones. Let me make clear that smoke saunas are also wood-fired, yes, but in a very particular way that makes them different from what most Finns in the 21st century consider as wood-fired. Back in the 19th century, they were the dominant type of sauna.

Although the smoke sauna is applied to a variety saunas that may have big differences in operation, they are clearly distinct from the rest. Their choice in heating makes a difference that affects everything else. For one, it means that the sauna must always be heated in advance, which allows sauna bathers to fully focus on bathing and removes the need to have a person taking care of the heating during operation. It also means that the sauna ventilation can’t rely on the stove to recycle air of the sauna room unlike with the “modern” continuously burning wood stoves..

The smoke “treatment” of the sauna chamber influences the multisensory sauna experience thoroughly. The odor, the acoustics, the looks and lighting all are different. As well as the heat. Interestingly all factors that influence the smoke sauna experience are not well understood. For instance, there is speculation about whether the soot blackened walls of the smoke sauna may produce a unique combination of infra-red radiation that influences the overall heating effect. Suffice to say, when heated to high temperature, the walls definitely emit heat radiation effectively.

I think smoke sauna, in all its variations, is a really unique experiential sauna type found in Finland. Unlike some Finnish sauna connoisseurs, I don’t regard it as the only possible great sauna type, because it also has a few downsides. But I do highly regard it because it is one of the few named saunas where the name also carries some expectation for the experience.

Stove is the required piece of special equipment. Sauna heating requires an unusual amount of energy in a short term to achieve the high operating temperature of the sauna (see previous article about the right temperature). This means that they have heating output power ratings from 4,5 kW (tiny electric) up to 50 kW (huge wood-fired stoves). The biggest setups are achieved using multiple stoves. The power requirements are somewhat tough for typical home electric systems.

The amount of power needed is directly dependent on the volume  of the sauna room. The stove power rating requirement is also affected by the insulation and finishing of the sauna interior as well as the volume of ventilation.

Where does the energy go?

The power consumption of the sauna has two parts:

Some heaters operate so that they store all of the energy needed for bathing during the first phase in the sauna stones. This is how smoke sauna and so called single-fired wood stoves work. To store this energy requires the stove to have a lot of mass, in the stones as well as in the stove structure itself. The more energy captured during pre-heating, the less energy, if at all, is needed during bathing.

Warming up stones takes up energy, approximately 2,6 kWh/100 kg when the stones are heated up by 100 degrees Celsius and the sauna to 70°C. The stored energy in sauna stoves enables to create steam (löyly) and also helps to dry the sauna after use, helping to maintain infrequently used saunas in a good condition, fighting rot and mold.

Is the sauna a very inefficient and unecological facility?

It depends. I can’t deny that on average Finnish households spend 5% of electricity bill on sauna heating, and thrice as much is relatively burned in stoves. Wood-fired stoves are carbon neutral but may produce unhealthy particular emissions. Their operating efficiency is not that great (50-60% for typical stoves) because much energy gets lost with exhaust gases through the chimney. Electric heaters do consume a lot of energy, but as such do not directly produce emissions (depending how the energy is generated in the first place). New Finnish houses equipped mechanical ventilation with heat exchangers can help to reduce the total energy loss. Much of the sauna materials can be recycled and no hazardous materials are needed to build a sauna. In every case, sharing a sauna among family members, with other households or even with total strangers in a public sauna is definitely the ecological way to enjoy sauna.

The stones are heated in the process of warming up the sauna. Electric heaters include resistors all through space and the sauna stones are placed between these heating elements. This means the biggest differences in electric heaters are based on the choice of heating elements and the amount of stones surrounding them. Of course the outlook of the stoves can vary dramatically so I’m not saying all 9 kW stoves are equal in any other regard.

In wood-fired stoves, there are actually two main varieties. The old variety is called the single-fired wood stove in which exhaust fumes flow through the sauna stones before it enters the chimney. The operating principle means that the stove needs a special hatch for creating steam because it has to hold the smoke inside during heating. These type stoves are quite rare nowadays, but used to be the norm 100 years ago. They originate from the smoke sauna stove, which had no chimney and the fumes are vented through a big hole up in the wall or ceiling.

The stones in the single-fired wood stove must be heated up to a high temperature (over 500 C so they start to glowing red) to get rid of all burning residue which would otherwise enter sauna air when pouring water on the stove. With this stove, the sauna air and structures do not warm up very much with these stoves, although the smoke sauna stove does heat up the whole cabin – sometimes so aggressively to cause a fire!

The most common is the continuously fired (or multiple firing) wood-fired stove. In this model, the fire chamber separates the stones from flames and exhaust heat. Heat is transferred to the stones and sauna air through ducts and metal surfaces. This structure invented in 1930’s is both a blessing and a curse, for latter, it is a bottleneck for stove efficiency. The blessing is that heating time is shorter, the stove itself is pretty fire safe,  and it can accommodate longer periods of bathing than single fire wood stove of similar build (in terms of weight and dimensions).

Multiple firing stoves are simple devices usually made out of 2-4 mm thick steel. Nowadays Finnish stoves include air feed for secondary combustion. More than the technology, the looks of the stoves have gotten modern in the past 20 years or so.

This concludes the third part of the Finnish Sauna Essentials. In the next part I will have few more words about how to pick the right stove as well as the importance proper sauna rocks and their maintenance.

Review of a recent sauna book from Finland