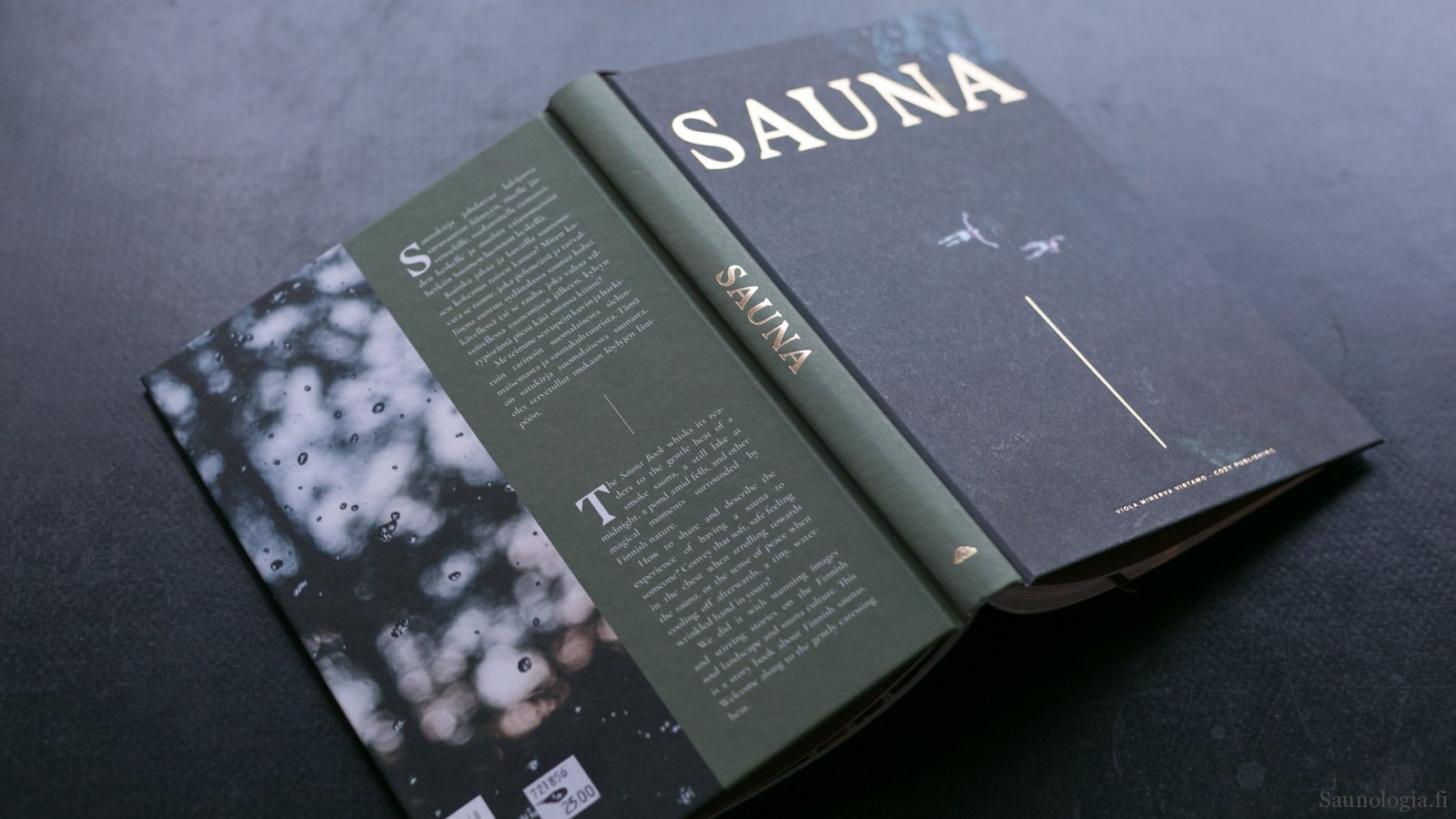 The 2018 season for gifting is at hand. Saunologia supports sauna-minded people by introducing a book which might come handy in filling Santa’s bag. The latest addition to Finnish sauna literature comes from young photographer Viola Minerva Virtamo. It is beautifully illustrated book that you’ll love to put your hands on and breath in the rural Finnish sauna spirit so elegantly captured on its pages. Despite the fact that the literary part does not live up to the high standards set by the visual expression, it presents itself as a worth token of Finnish sauna life style. It is also a rare instance of a Finnish sauna book created by Finns but made accessible for English audiences.

What is this thing?

Viola Virtamo is a young Finnish freelance photographer and designer http://www.violaminervavirtamo.com/ . After a two-year project, she has created a book called Sauna published by Finnish Cozy Publishing in October 2018. This hard cover book has 210 colored pages filled mostly by steep, darkish photographs of Finnish sauna, nature and sauna bathers as discovered in their preferred rural habitat – where few Finns live anymore but many love to visit .

Although the photography dominates the book and Viola’s name is alone on the cover, photography is not the full story. Writers Liisa Talvitie and Heli Thorén have contributed a text that spans topics describing different types of saunas to a sauna glossary. Five stories about sauna culture and three recipes are also found between the covers. Book is bilingual, presented in both Finnish original as well as in an English translation by Rebecca Watson.

Reviewing the book as a photographic art piece is a treat. Photos are balanced, carefully laid out, the printing paper emphasizes the high contrast and dark shade which at least now in the heart of dark winter time seems appropriate. Photography style is quite documentary, providing carefully selected but still convincingly authentic glimpses into pure Finnish nature and pieces of sauna culture found in the middle of it.

Style is recognizable from both contemporary lifestyle magazines, which Viola has worked, as well as from domestic artistic photography movements of the recent decades by which she is not part to cause of her young age.

All of this makes the book pleasurable to leaf through and mentally transport yourself to the height of the Finnish summer. The book looks great and feels like it must be taken seriously. If I could rename the book, I would call it Nordic nature, sauna, and wrappings.

As such I also like the fact it pretty well represents what I believe to be the contemporary sauna bathing at those over 500,000 summer cottages and villas around Finland. Although it is not emphasized, I also appreciate the documentation of the fact that Finnish people still privately enjoy sauna in the nude, although many other visual documents try to do away with this non-American tradition.

The documentary feels more like a dream than a reality for a Finnish person such as myself. It is expressive of the 21st century ideals of spending quality time outside Facebook, in a world where iPhone does not exist (at least for a couple of hours at a time). But then again, hey, both Finns and foreigners are definitely allowed to dream how sauna in the beautiful Finnish nature at best feels like!

Only critical comment I can make regarding the visuals is that after few readings, or leafing through it, it is hard to escape seeing subtle product placements. It is not very disturbing, but it’s there. 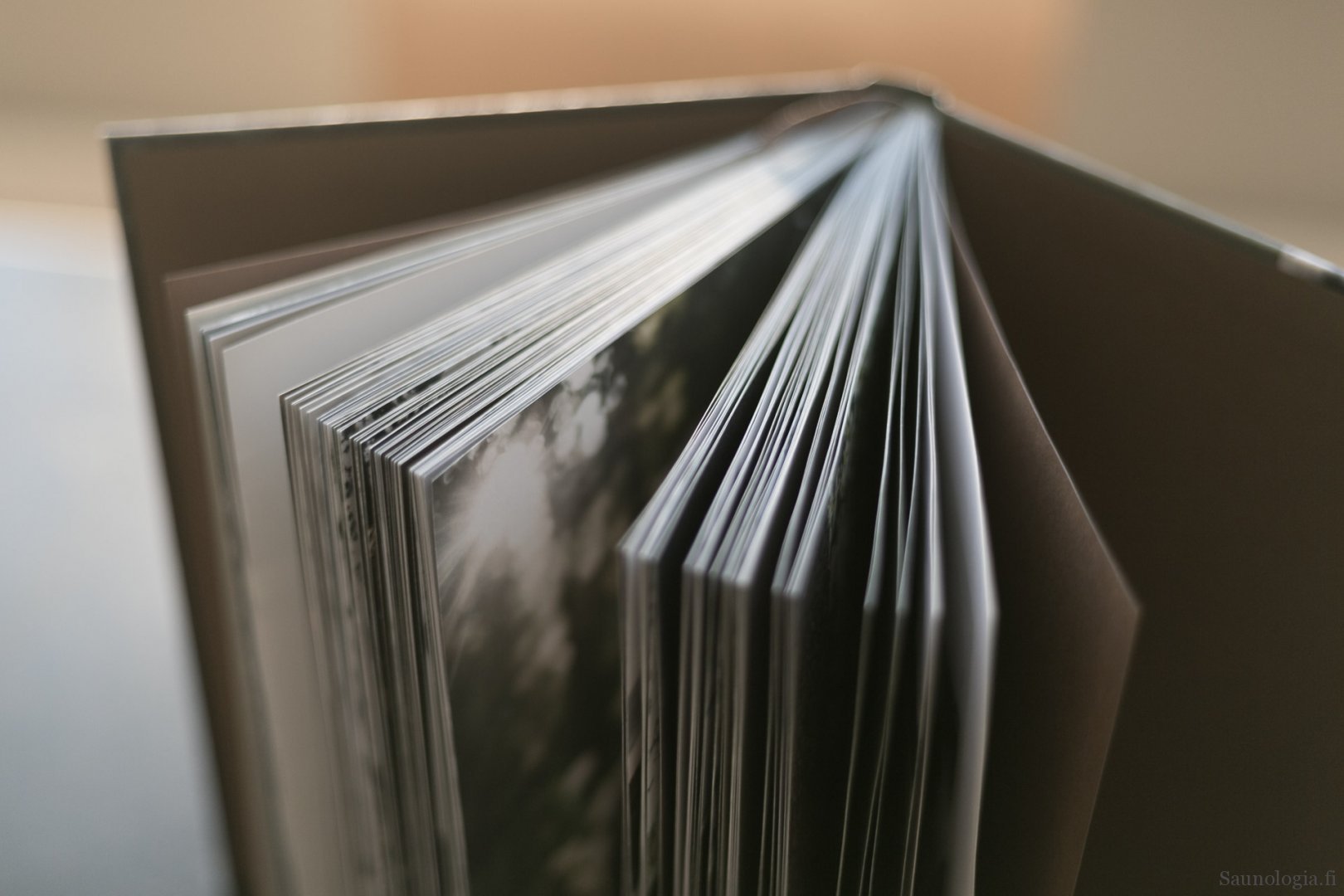 Words, what do they say?

After much praise, my main criticism fall upon the text. In an interview, Viola told me that initially they thought of only including short personal stories among the photos. Now there are still few of those, but most of the text reads as a non-fiction book about saunas. As my Finnish readers know, I have reviewed a few of these on Saunologia in the past years.

My main issue is this: there are photos and there’s text, but they’ve got little to do with one another. The text deals exclusively with saunas in urban and rural Finland, although the photos are exclusively about rural and picture perfect nature landscape of Finland. Sometimes with sauna, sometimes without. Another issue is that I can’t really find the story line of how the topics included in the text have been chosen. The glossary section does, I admit, cover many of the essential elements that make up the present Finnish sauna culture, but the opening part on Finnish sauna types just strikes me as odd.

Then comes the content beneath the headlines. Now, I will say for the authors that they’ve clearly worked hard in order to explain the concepts and customs so people foreign to Finnish bathing culture might understand it. Unfortunately I’m so deep inside that I can’t tell, but I got the impression that even a person new to sauna could by reading this understand something of this age old complicated tradition.

So I asked my neighbor for help. He's originally from Japan and has lived in Finland for a couple of years. He found the book's writing well accessible and liked the emphasis the book made on the connection between nature and sauna. This convinced me that the text is successfully geared towards foreigners.

To support this orientation, I admire that explanations about Finnish sauna are mostly sound. Thus I believe the text under Glossary part can provide a meaningful introduction to Finnish sauna culture for those who don’t know it by heart.

But there are few points that I disagree strongly with. First and foremost is a section called About Finnish saunas. Now as an aspiring man of science, saunologist and a private member of the Sauna from Finland association, I need rebuke the claim the authors make about the history of sauna, or sweat bathing.

Because for some reason the very first thing you’ll encounter in the book is a statement that the Mayas actually invented sauna bathing in approximately 500’s, well before Finns.

This comparison is not only absurd but also false.

In Finland we need to admit that the written history of sauna does not extend to very far. Written history of Finland is just not very extensive and we can’t escape the fact that two thousand years ago, this land was inhabited by very small amount of people who’d never been touched by advanced cultures like those of Roman or Mayan origin.

However archeological evidence and linguistic origins of the word “sauna” extend the history of sauna all the way to somewhere between 0-1000 A.D. Most Finns like to think that there’s a strong reason to believe that sauna could have existed already in the stone age (which ended sometime around 1000 BC) and that the proto language of Baltics, which Finnish language is derived from, may have used some variation of the word “sauna” already before year 0. There is too much uncertainty and a wide range of possible years of origin to enroll Finnish sauna in ‘there first’ history competition.

And more importantly, the comparison is absurd because of a well known historical fact that Romans built notable hot air bathing facilities already well before the reckoning. Although these establishments were much less sauna like than the Mexican temescal, they did provide opportunities for sweat bathing (please see Mikkel Aaland's electronic version of Sweat for details).

The vague treatment of the history pops up here and there, but it failed to make me as frustrated as in this point again. One point I do like to bring up is the way book lays out a convincing story of how the regular sauna day has switched from Saturday to Friday. This presumably happened as the working week was reduced to five in during 1960’s.

Sounds plausible, but is unfounded.

The only noteworthy study I know of from 1991 by Professor Erkki Helamaa (Helamaa, 1991: Asuntosauna. Rakennustieto) clearly shows that the increasing number of saunas has made sauna more popular across the week, but overall Saturday still remains as the most desirable sauna day at least among the surveyed urban neighborhoods.

I maybe got bit too excited about history, but less make a comment about the present as well.

Because the book ends up with a small catalogue of (mostly) public saunas in three big Finnish cities. I am surprised by their inclusion , but I’d like to point out that another Finnish book from last year, called Kaupunkisaunoja that does a much better job in extensively listing and introducing saunas also outside these locations (and also check this website: https://saunat.co/yleiset-saunat/ for saunas in 15 cities). So the book would have benefited from some saunological fact checking. Now it mentions to very obscure or generic references which are unlikely to convince even a slightly educated reader of the extensiveness of background research.

How did it read?

The English translation also has some issues with the choice of words. The prime example is translation of the bunch of leaves used in sauna, which in Finnish is called vihta or vasta and is generally be translated as a whisk. Sauna bucket is okay, although industry usually prefers pail, which some people understand to refer to a water carrying solution.

Finally, from the Glossary, I would like to note that nobody (should) talk about continuously heated saunas. I believe the risk of misunderstanding is small, but a sauna is a building, which can be heated with a continuously or “multi-firing” stove, or with single wood-fired stove in advance. The sauna itself is not much (if at all) different regardless of how it is heated up. The terms “wood” and “electric” sauna which has similar strange meaning are for some reason in common use in Finland.

By now, it should be clear that this is an impressive book by photography and an ambiguous book by writing. The fact that the book has been printed in two languages laid out next to one another means that the amount of text to read is limited. This format provides easy reading experience and a joy of discovering inviting pictures of moments you want to dive into. It feels precious despite its moderate under 30€ price tag so it will be a welcomed gift outside Finland.

I can warmly recommend this for people who would like to get a feeling of Finnish nature, rural lifestyle and sauna practice. The text part helps in understanding the culture, but will leave many questions unanswered and provide a somewhat confusing overall impression about Finnish sauna. But I do think well fits under publishers slogan Dream cozy.

You can order the book from e.g. Finnish Design Shop who offer international delivery:
https://www.finnishdesignshop.com/books-lifestyle-sauna-p-20870.html

Big thanks for Viola Minerva Virtamo for the interview and Ulla-Maija Lähteenmäki of Cozy for providing the book.