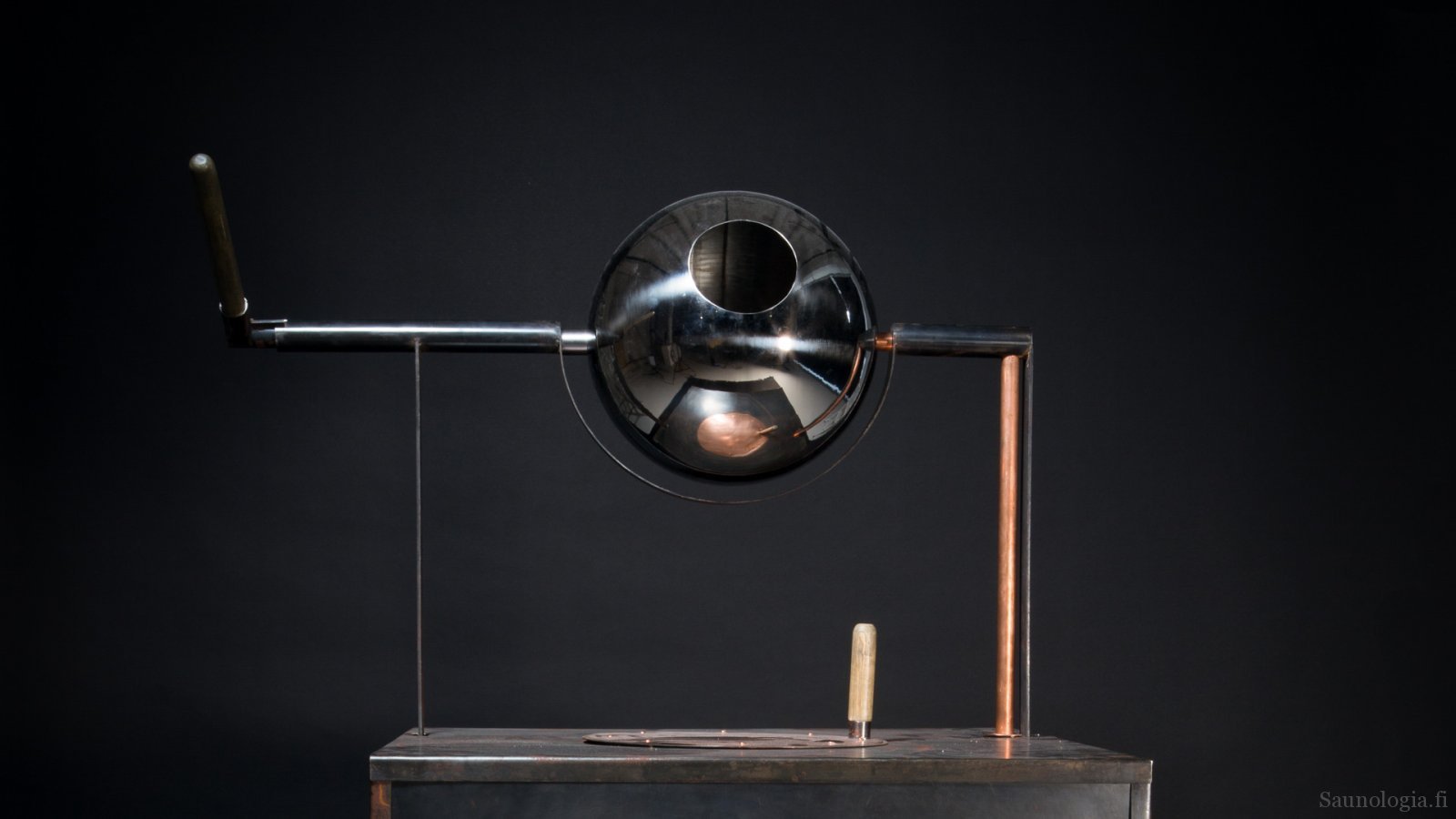 Aalto University exhibited a set of student designed explorations into form of the holy triad in sauna space, stove, bucket, and ladle,  during Helsinki Design Week 2017. The show called Muotoja Löylystä - Forms from Steam was on display in pop-up space of the National Museum of Finland from 7th to 16th September. It included work from seven international  students. This article gives a short review of the installation of six stoves, written in English to celebrate the global appeal of sauna as well as the young designers bravely tackling this ultimately Finnish design challenge.

Aalto University School of Arts, Design and Architecture course instructed by industrial designer Simo Puintila decided to celebrate ‘Finland 100 Years’ by choosing the re-design of sauna stove, pail, and ladle as the topic of product design project.  This year long series of events has evoked many projects around sauna, but I feel this exhibition involves the freshest ideas this far found in any of the sauna related Finland 100 projects (well, the project of putting a sauna on top of Moulin Rouge was also adventurous).

This re-design challenge was embraced by a group of international Masters students. It succeeded in delivering six new concepts for stoves that made it to the exhibition. I believe they nicely stand out from the Finnish mainstream of usually rather boring stove design. Of course, this is both just and expected, as foreigners should definitely find new dimensions to the usual forms that have been circulating in the domestic industry for years.

Selection of example commercially available Finnish stoves from Saunologia's Pinterest board exhibits the variety, and the lack of it.

Lecturer Simo Puintila gave a pretty open ended brief for the students to follow. It was delightful to see how the students had each found their own design problem. Few of these were in my opinion real problems (even if not in this context backed by any design research). As usual, design problems were resolved with a design, here usually the stove.

Let's make one thing clear. This is not an art critique but rather an applause. A single university course (or here, even two consecutive ones) is a too short time to solve as a complex problem such as designing a complete product such as stove in full. So I have been trying to look at the design through very rose-coloured lenses.

A product called Jakaa, a wood-fired stove designed for a tent sauna by Pierre Blandeau was a fine exception, apparently being the only functional prototype. Pierre’s work also included a beautiful idea for a ladle /bucket combination which is suspended in air, or here connected to a chimney. That part of the idea feels pretty mature for deployment in small saunas.

The stove itself looks attractive, but I don’t see it making its way to production. For tent use, it does not appear particularly well portable. Neither do I think it would pass EU emission requirements for devices of its type.

The wood burning emissions were surprisingly an inspiration and the problem for the design of Marina Baranova. Concept called Sauna Habits is made of steel and fireproof concrete. The latter material was a popular material of choice in the exhibition and also a very interesting material exploration hardly even seen on the surface of Finnish stoves.

In Sauna Habits, the thing that matters was inside. Her target was to create a stove which would improve efficiency and cut emissions. However, I do dare her to take her stove out for testing with Jarkko Tissari’s new lab to find out how easy is it to pass the EU requirements, or current references such as the Sydän-kiuas .

Improving burning efficiency is a noble goal, but luckily she didn’t satisfy with any traditional design for outer shell either. Considering how Tulikivi has created similar rounded, cylinder forms out of molded stone, this design has merit for production with little re-engineering.

There were also other interesting material discoveries and proposals. The electric stove Sauna Kit 00of Mu He was a familiar round cylinder encased in what looks like black car tire, but turns out to be silicone. Bold.

Shih-Yu Chen’s contribution was a concept of bucket and ladle that really tightly integrates several familiar materials in a new combination (with a hint of Asian flavor). It shouldn’t be difficult to find the analogy for which common sauna object inspired the handles:

In Yuze Wang’s re-design, sauna stones appear as main idea. In his Shan Shui concept, stove is covered in sturdy concrete plates, but everything is topped by his new topography of sauna stones. In his own words “I decided to directly sculpt the sauna rocks as lots of long rock sticks and arrange them in the form of a mountain.” The outcome is visually fresh and appealing. I have much concern if this could be ever made to work, then again, similar variations of limestone have been already done. Theoretically, the stones have a potential structure.

The other electric stove of the presentation, Hiljaa, was imagined by Sara Gottschalk to be a heart of a small sauna. What I like about her design is the use of copper, yet another popular material in the show. She has also challenged the monolithic function of the stove by opening a door in its side. I doubt this could be safely operated in a sauna for anything but frying eggs, but it does look wonderful!

My favorite piece was called Mantle, created by Jakob Záhor. This sketch for a wood-fired stove boasts extremely strong outlook as combination of blackened steel and shiny copper. It gives out a steam punk feeling and maintains the technical spirit of sauna.

The stove is actually an innovation of two parts, the stove housing and  a yet another new idea for dispensing water. The water is cast through a hatch on top using ball shaped “bucket” operated by a lever. Those of you familiar with stoves of Löyly can see the resemblance.  The bucket presumably holds a light which lights the steam rising from below. I don’t personally see much value in the water dispensing mechanism which at its current height seems slightly dangerous one. 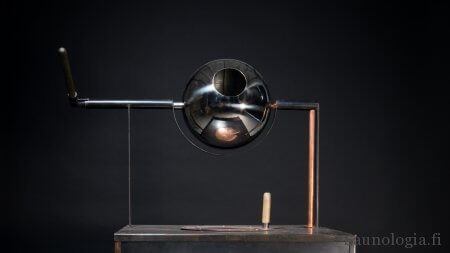 I love the housing of the Mantle, in its stark contrast to steel wire designs a la IKI that have been popular for twenty years now. I think Mantle could quickly turn into a commercial product, even if probably a pretty expensive one.

The exhibition is unfortunately already over and most of the designer talents displayed there have now left Finland. However, I think these picture of exhibition well remind us that there is much room for user-centric, design-based innovation in the Finnish stove manufacturing space.

Recently, Tulikivi has done some progress here, but as the publicity concerning the usability issues in small electric stoves and the Vuosaari fire showed, there are more directions to pursue. I was positively surprised by Sauna Habits, which approached one of the biggest issues the continuous wood-fired stoves face in future. However, I would have been even more delighted if somebody had dared to concept a rocket stove based sauna stove. Well, maybe next year Simo?

My congratulations to the students and big thanks for their instructor for seeing this work being brought into public attention (as well as permitting the photos to be shared here)!

The exhibition Forms from Steam has opened In the National Museum, presenting the design students' views on Finnish sauna culture and visions of the new sauna.

The stoves, water buckets and ladles in the exhibition are unprejudiced visions of how sauna experience and sauna aesthetics appear in the eyes of designers from different cultures.

- These prototypes created by foreign design talents are open-minded and sophisticated visions of how the aesthetics of Finnish sauna ritual could be interpreted. It challenges our established conception of sauna experience and manages to emphasize the most important elements of Finnish sauna; understandability, honesty and simplicity, says industrial designer and lecturer Simo Puintila.

The product concepts have been implemented during Form Exploration course as part of the Collaborative and Industrial Design master studies at the Aalto University School of Art, Design and Architecture. The purpose of the course "Form Exploration" was to familiarize foreign design students with the Finnish sauna culture. The design challenge was to crystallize the personal experience and vision that was formed in the orientation to the objects to be designed.

3 thoughts on “Exhibition of Designer Stoves: Forms of Steam in Finnish National Museum at HDW2017”